Alex Plum is a former IIP intern who spent summer 2018 in Uruguay doing limnology research with the Centro Universitario Regional del Este of La Universidad de la Republica Uruguay. He was awarded the Promega International Scientific Scholarship for this work.

University of Wisconsin–Madison senior Alex Plum competed this year as a finalist for the Rhodes Scholarship, the oldest and most celebrated college award for postgraduate international study.

The 32 American winners of Rhodes Scholarships were chosen Saturday. Dozens of others, including Plum, made it to the final stage of the prestigious competition. 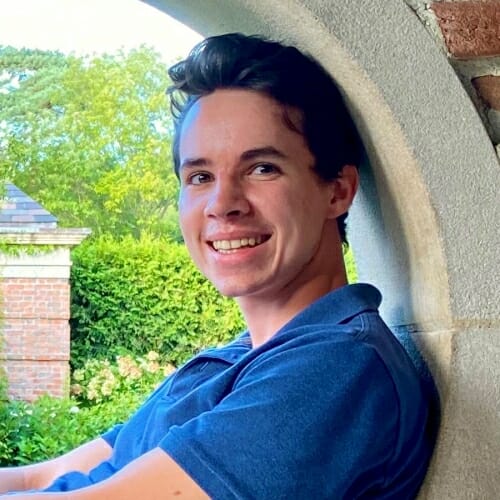 “The Rhodes Scholarship is the very pinnacle of undergraduate achievement, and to be among the finalists is a huge honor,” says Provost Karl Scholz. “During his time with us, Alex has been a scholar of extraordinary ability and a leader inside and outside the classroom. He is poised to become an intellectual leader who makes a broad impact on the world.”

Plum, of Whitefish Bay, Wisconsin, is earning a double major in mathematics and engineering physics, with honors in the liberal arts and certificates in physics and computer science. He will graduate this spring.

As an undergraduate at UW–Madison, Plum has been the recipient of a Wisconsin Academic Excellence Scholarship, a four-year, partial-tuition scholarship for top Wisconsin high school graduates. In addition, he has received over a dozen departmental and campus-wide scholarships, including a Sophomore Research Fellowship and a Hilldale Research Fellowship, UW–Madison’s top campus-wide undergraduate research awards. Since his freshman year, Plum has worked with botany Professor David Baum on research projects investigating the origin of life.

Plum has sought numerous off-campus research opportunities. In summer 2018, he worked with a team of ecologists in Uruguay to develop computational models to investigate the effects of environmental policy on a water reservoir. During spring and summer 2020, he worked with physical biologist Christopher Kempes, a professor at the prestigious Santa Fe Institute, the world’s leading research center for complex systems science.

Beyond coursework and research, Plum tutors at the Undergraduate Learning Center and volunteers with a science outreach program. He is also the president of the Socratic Society, a philosophy club where students discuss topics at the intersection of philosophy, the sciences, and current events. Plum has helped broaden the appeal of the organization to a wider audience.

“It’s always gratifying to see someone like Alex embrace so many of the great opportunities available to UW–Madison students both on and off campus — what we call the Wisconsin Experience,” says Julie Stubbs, director of the Office of Undergraduate Academic Awards, who assisted Alex through the application process. “Through research and volunteering Alex has developed the relentless curiosity and purposeful action we hope for all Badgers, as well as the commitment to use his knowledge and skills to address persistent societal problems.”

Hundreds of elite applicants from dozens of colleges and universities vie for Rhodes Scholarships each year, which provide all expenses for several years of study at the University of Oxford in England. Candidates are judged on a proven record of intellectual and academic achievement, integrity of character, interest in and respect for others, leadership ability, and the energy to fully utilize their talents.