Michael Schlicting led the Badger Rail team to the final round of the Smart Cities-Smart Futures competition sponsored by Foxconn. Badger Rail includes past and future participants in the Central Japan Railway Company (JR Central) internship program in Japan, including Schlicting who joined the program in Tokyo in summer 2018.

From the Faster Badger Newsletter: 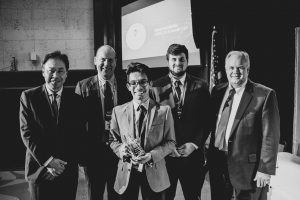 Throughout the school year, the project evolved from comparing current domestic and international smart cities proposals (round 1), to our vision of what a smart city would look like centered around a high speed rail station (round 2), to how we would fund a smart city (round 3). All phases revolved around the importance of using high speed transportation to build the core of a smart city.

To date, our group has won over $7,000 in prizes and the work was featured in the Future Transportation in Wisconsin conference on April 26.

Read about the other UW-Madison winners and learn more about the competition.

Congratulations to Michael and the team!