Sometimes the gains from a degree go beyond what is learned in the classroom.

That was the case for Tatsuro Kozaki, who enrolled in UW–Madison’s master’s program in nuclear engineering and engineering physics (NEEP) in 1994. When Kozaki arrived on campus, he was already an 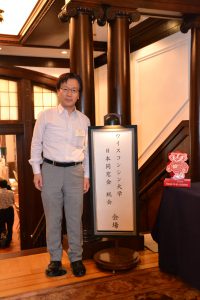 established professional. However, even with more than 13 years of experience at Hitachi, Ltd., a Japanese multinational conglomerate company founded in 1910, Kozaki still saw opportunity for growth.

After receiving his master’s degree in 1995, Kozaki returned to Japan and Hitachi, where he eventually became involved in efforts to bring students to Japan in an effort to internationalize the company. As a result, Kozaki has also been instrumental in creating a pipeline for UW–Madison students to gain professional experience and their own global perspective.

Six students from UW–Madison have participated in the internship with Hitachi since it began in 2014. The first two students, both from NEEP like Kozaki, completed the internship at Hitachi-GE Nuclear Energy (HGNE), Ltd. NEEP students took part in the program again in 2016. Students from UW–Madison’s mechanical engineering program took part in the program at the Power Business Unit of Hitachi, Ltd. in 2017.