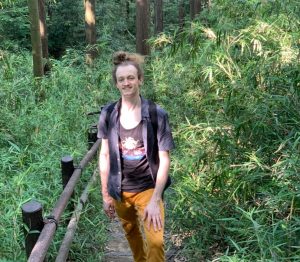 Neil Jerome ’15 majored in Computer Sciences and Japanese and was a spring 2014 intern at NEC Corporation in Nara and Kawasaki, Japan. Neil currently works as a software engineer at Rakuten, Inc. in Tokyo, Japan.

After some years to reflect, what were some highlights or key takeaways from your IIP internship?

I think the biggest takeaway from spending an extended time living in another culture was realizing that there are many things in life which I had taken for granted. Experiencing Japanese culture gave me a new appreciation for aspects of American life and culture which I’d never noticed before, as I’d had nothing to compare them to.

How did your IIP internship experience influence your current path?

Professionally, it gave me Japanese work experience, a network in Japan, and plain software development experience. All three of these were highly valuable for landing the job I have now. Personally, it convinced me that there was a future for me working in software in Japan. This was a big factor in making the decision to move back to Japan after graduation to start my career.

How did you end up where you are now?

I was born and grew up in the western suburbs of Chicago. After graduating high school, I moved to Madison to study Japanese and Computer Sciences at UW. With the help of IIP, on the strength of my coursework and US intern experience I was able to land a Japanese internship with NEC Corporation. After returning from Japan and graduating, I was able to leverage my degree and my experience at NEC to get a job working as a software engineer at Rakuten, Inc. in Tokyo – which is where I am now.

Is there any particular skill you gained from your internship that you think helped you get a job after? If so, what?

The technical skills I learned were very marketable, but since I had plans to return to Japan the key thing for me was learning how to communicate effectively in a mix of Japanese and English. At Rakuten we do our technical interviews in English, but I ended up surprising one hiring manager by switching to Japanese briefly when he was having trouble phrasing a question in English. After my interviews, I received an offer to join specifically his team so I am pretty sure this is what got me the job (not to mention how useful it has been since I started working).

Why should undergraduates consider interning abroad?

If you have an interest in starting a career overseas, the opportunity to create a network of former coworkers who have a positive impression of your professional skills, and live in your country of choice, is something you should not pass up. And even if you don’t plan on living overseas permanently, spending an extended time abroad will give you useful insight on life at home that few people have access to.

What advice would you give to students about returning abroad?

If you plan on returning to the country in which you interned, don’t feel shy about asking your former coworkers for help with the job hunt. There may be aspects of recruiting in their country of which you’re unaware, but which make a big difference in whether or not you will be interviewed or hired.

Is there any custom, food, tradition from your host country that you still enjoy now?

My favorite tradition in Tokyo is the many fireworks festivals which take place in the summer. It’s great to go out with your friends, have some Japanese festival food, and see all the people wearing their colorful yukata.

In honor of the International Internship Program’s 10th Anniversary, we will be bringing you profiles of IIP alumni who have interned all over the world! Find more alumni profiles here.