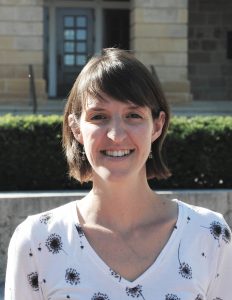 Carly has been director of IIP since 2022.  She joined the office in spring 2014 as a graduate intern developing internships in Latin America & Spain and full time in summer 2014 as an Advisor and Program Manager, adding Africa internships to her portfolio. She is a UW alumna with a Masters degree in Spanish literature and a BA in Spanish, LACIS and Journalism. Carly was recognized with the International Division’s 2018 Early Career Award for her contributions to IIP and the International Division.

Carly first became interested in Spain after studying abroad in Madrid her senior year of high school with AFS; while at UW she also studied abroad in Quito, Ecuador in addition to doing an international journalism internship in Buenos Aires, Argentina at a trilingual online magazine. She returned to the Southern Cone to earn her Masters in Journalism from La Universidad Torcuato di Tella in Buenos Aires where she worked at one of the country’s leading newspapers, La Nación, in addition to serving as an advisor and public relations associate for a provider company that brought students from the U.S. to do media internships in Argentina. Carly then moved back to Madrid, Spain for three years where she taught English and wrote freelance articles in economics, arts and gastronomy for different media outlets. Despite many international travels, Carly is a proud Wisconsin native.